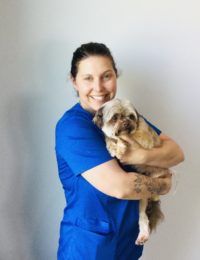 Kim grew up in Charles County and moved to St. Mary’s County in 2004. Kim started at Anchors Kennels in 1997. She was asked to help bathe for the groomers and after a few months she was asked to help with the grooming. Right before her 18th birthday she started officially as a groomer. She moved on to Riviera Boarding Kennels as a groomer in 2000. In 2017 she became a medical (human) assistant and continued to groom part time. She decided that handling human samples and drawing blood was not for her after all and decided to return to grooming with Companion Care Veterinary Hospital. She has 4 children and 2 stepsons.