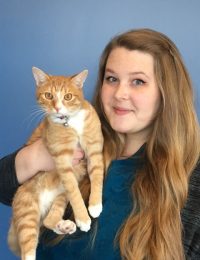 Sam has been at Companion Care since April 2015 and enjoys animals of all types! She has two kitties named Jack and Dexter. She also has a leopard gecko named Yui. Sam really enjoys doing laboratory work. In her spare time she is usually binge watching a show on Netflix, playing video games or having adventures with her boyfriend.